Extension and compensation wires and cables

Extension cables and/or compensation cables is the technical term given to the connection cables between the type thermocouple temperature sensors up to its instrument reader (controller, recorder, etc).
I want to quote this product
❮ ❯
This type of feature is necessary so that the signal generated by the sensor does not show error in reading because to be led by another metallic conductor, the signal would have lost intensity and other electrical phenomena. These are called the extension cables.


For so-called "noble thermocouples" that have high cost elements in its chemical composition as Platinum and Rhodium (case of thermocouples type R, S and B) are used cables with metal conductors to compensate for the loss occurred signal, thus, eliminating reading errors. These are called the compensation cables.


The correct choice in the instrument sensor interconnection should also include the place where the passage of the cable will be made, observing environmental conditions of temperature, humidity, electrical interference and possible abrasion.


Regarding the gauge (thickness) of the cable, it should be noted dimensional limitations where the cable will pass and any kinks in the installation process or the operation of the cable.


Cables with thicker gauges, tend to have greater resistance to breakage in case of constant movement of installation, but are more costly and need to use cable trays / larger conduit.


As the signal driven by thermocouples cables is a very low electrical signal, it is recommended to install them in cable trays and metal conduits, avoiding problems of induction / crash on the premises.


The Alutal also provides all cables with electrostatic shielding and drain wire options for these cases simple thermocouples cables have two conductors, therefore, positive and negative. It is extremely important that they comply with the polarity of the thermocouple and cable connection.


There are international standards that are used for coloring the thermocouples cables as well as his two drivers: positive and negative. Among the most widely used standards in the Brazilian market, we can mention the ANSI Standard (US), DIN (European / German) and JIS (Japanese).


It is recommended that each plant and facility chooses to use only a standard within its network of thermocouple cables, avoiding mistakes, given the fact that a color of a standard for a particular type of sensor may be repeated in another standard for other sensor.


For cases thermocouples double installation, triple or multi-thermocouples (temperature sensors with more than one sensing point), snakes may be provided, where in a one cable conductors have several pairs of sensors. The determination of the long distances requirements for cable length should be noted the total circuit resistance and prevent electrical noise in the thermocouple signals.


The cable resistance will vary depending on the type of thermocouple gauge and length. The strength of the permissible circuit depends on the instrument's input impedance at which it is connected, the Alutal recommends keeping the total circuit resistance below 100 ohms, and as a guideline, 20 AWG cable or even with larger gauge and places free of electrical interference , keep the total length of less than 30m and for longer distances we recommend using temperature transmitters inside the head.


The transmitter will convert the signal into a standard immune to fluctuations and electrical loads, providing the connection over longer distances. The Alutal works with a wide variety of types of insulation, standards, gauges and electrical insulation in your stock.


See our sales department and technical area for the correct specification of your cable. It will be a pleasure to serve you! 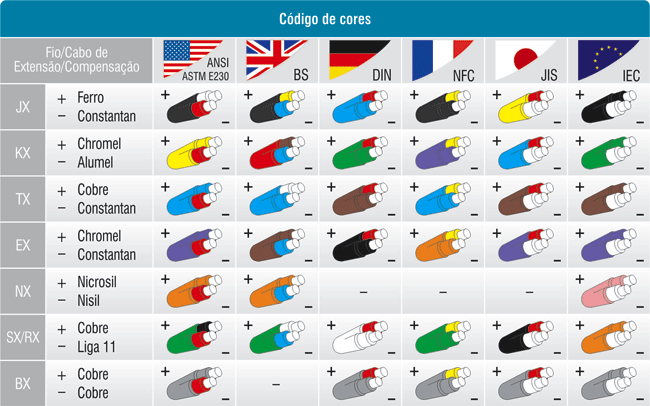 Características da isolação
Limites de erro - Fio ou cabo de compensação
Folders
Certificates
Alutal performs tests in all stages of the production process of its sensors. Check below the tests and certifications applicable for this series. If you want to get a copy of the tests for the lot of your purchase, request with the commercial department at the time of your order.
Certificates for this series:
Quotation